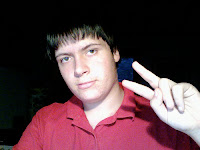 "Arthus" is the web name of a 14-year-old student in Vermont who has recently become actively involved in the online dialog about educational technology. I find his voice an interesting--maybe a critically important--addition to the discussion. To me, Arthus is not representative of most 14-year-olds, but is representative of the kind of independent, engaged, proactive, and self-directed learner we often think will thrive in the flattened and connected world of the Internet.

Now the big question: will the use of Web 2.0 and collaborative technologies do more than just highlight intellectually mature youth, and actually help to promote, encourage, and support this learning style? If so, are we ready for it? Some of what he says is going to be very hard to hear for teachers, and will feel threatening--maybe especially because of its accuracy. It's one thing to hear a teacher say some of these things, it's quite another to hear them from a freshman in high school. How would the learning environment of 9th grade, for example, have to change when you have a classroom full of youth this intellectually independent?

(It is important to note that I spoke with Arthus's mother prior to conducting the interview to make sure she was comfortable with this level of exposure. )

Listen to the the Interview in MP3 format

Listen to the Interview in Vorbis OGG format