Join me Tuesday, February 22nd, for a live and interactive FutureofEducation.com webinar with John Seely Brown, co-author of A New Culture of Learning

.  The 21st century, he and Douglas Thomas state, is a world in constant change, and the book pursues "an understanding of how the forces of change, and emerging waves of interest associated with these forces, inspire and invite us to imagine a future of learning that is as powerful as it is optimistic."

Date: Tuesday, February 22nd, 2011
Time: 5pm Pacific / 8pm Eastern / 1am GMT (next day--international times here)
Duration: 1 hour
Location: In Elluminate. Log in at http://tr.im/futureofed. The Elluminate room will be open up to 30 minutes before the event if you want to come in early. To make sure that your computer is configured for Elluminate, please visit http://www.elluminate.com/support. Recordings of the session will be posted within a day of the event at the event page.
Event and Recording Page:  http://www.learncentral.org/event/136783 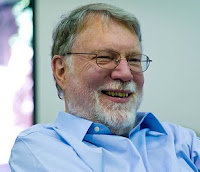 John Seely Brown is a visiting scholar and advisor to the Provost at University of Southern California (USC) and the Independent Co-Chairman of the Deloitte Center for the Edge.

Prior to that he was the Chief Scientist of Xerox Corporation and the director of its Palo Alto Research Center (PARC)—a position he held for nearly two decades.  While head of PARC, Brown expanded the role of corporate research to include such topics as organizational learning, knowledge management, complex adaptive systems, and nano/mems technologies.  He was a cofounder of the Institute for Research on Learning (IRL).  His personal research interests include the management of radical innovation, digital youth culture, digital media, and new forms of communication and learning.

John, or as he is often called—JSB— is a member of the American Academy of Arts and Sciences, the National Academy of Education, a Fellow of the American Association for Artificial Intelligence and of AAAS and a Trustee of the MacArthur Foundation.  He serves on numerous public boards (Amazon, Corning, and Varian Medical Systems) and private boards of directors.

He has published over 100 papers in scientific journals and was awarded the Harvard Business Review's 1991 McKinsey Award for his article, "Research that Reinvents the Corporation" and again in 2002 for his article “Your Next IT Strategy.”

In 2004 he was inducted in the Industry Hall of Fame.

(HBS Press, 2000) that has been translated into 9 languages with a second addition in April 2002, and with John Hagel he co-authored the book The Only Sustainable Edge

which is about new forms of collaborative innovation. He has just completed two new books – A New Culture of Learning

with Professor Doug Thomas at USC and The Power of Pull

From the book's website:  "The 21st century is a world in constant change. In A New Culture of Learning

, Douglas Thomas and John Seely Brown pursue an understanding of how the forces of change, and emerging waves of interest associated with these forces, inspire and invite us to imagine a future of learning that is as powerful as it is optimistic.

"Typically, when we think of culture, we think of an existing, stable entity that changes and evolves over long periods of time. In A New Culture of Learning, Thomas and Brown explore a second sense of culture, one that responds to its surroundings organically. It not only adapts, it integrates change into its process as one of its environmental variables.

"By exploring play, innovation, and the cultivation of the imagination as cornerstones of learning, the authors create a vision of learning for the future that is achievable, scalable and one that grows along with the technology that fosters it and the people who engage with it. The result is a new form of culture in which knowledge is seen as fluid and evolving, the personal is both enhanced and refined in relation to the collective, and the ability to manage, negotiate and participate in the world is governed by the play of the imagination.

"Replete with stories, this is a book that looks at the challenges that our education and learning environments face in a fresh way."
Posted by Steve Hargadon at Monday, February 21, 2011