Join us in September for a third (and final?) live and interactive FutureofEducation.com interview with Charles Fadel, who will explore the intersection of 21st Century Skills and STEM.  He will describe how the need to teach for Skills impacts STEM:  by requiring a more critical review of the curriculum to refocus on what is relevant (applicable and significant), and by generalizing approaches found mostly in teaching Sciences (via Projects).

Date: Tuesday, September 7th, 2010
Time: 5pm Pacific / 8pm Eastern / 12am (next day) GMT (international times here)
Duration: 1 hour
Location: In Elluminate. Log in at http://tr.im/futureofed. The Elluminate room will be open up to 30 minutes before the event if you want to come in early. To make sure that your computer is configured for Elluminate, please visit http://www.elluminate.com/support. Recordings of the session will be posted within a day of the event at the event page.
Event and Recording Page:  http://www.learncentral.org/node/95438 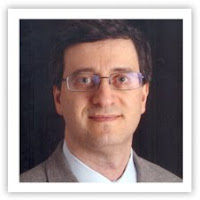 Charles has been awarded five patents on video, content, and communication technologies. He holds a bachelor of science in electronics with course concentration in quantum and solid-state physics with a minor in neuroscience, and a master of business administration in international marketing. An avid reader, he has autodidactically learned disciplines such evolutionary psychology and comparative linguistics. He also enjoys the lessons of classical history.
Posted by Steve Hargadon at Thursday, August 26, 2010