Join me Tuesday, September 20th, for a live and interactive FutureofEducation.com webinar with award-winning documentary producer Bob Gliner about his education movie, Lessons from the Real World: "Learning to read, do math and other subjects happens when students care about what they are learning, rather than drilling them with subject matter largely divorced from their real lives. This engaging documentary provides a first hand look at K-12 schools and classes that weave community and societal problem solving through their curriculum as a way of both preparing students for active participation in democratic society, as well as motivating them to learn basic skills as part of a meaningful educational experience."

Bob Gliner is an award winning documentary producer with more than 30 programs to his credit. His programs have appeared on PBS stations throughout the United States and have also been shown to classes in a wide variety of university and public school settings, as well as by nonprofit organizations. His primary focus is social problems and social change - both inside the United States and throughout the world. He has shot programs in such disparate locales as Russia, Macedonia, Viet Nam, India, Tanzania, Israel, Ecuador, and Cuba. He is competent in all aspects of the production process from initial stages of researching and organizing the production to script writing, interviewing, camera and editing. He is also a professor of sociology at San Jose State University in San Jose, California. 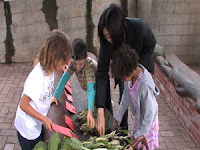 Lessons from the Real World:  "Many people feel our public schools are failing, or at best, muddling through. What to do about this critical issue has almost exclusively focused on the efforts of No Child Left Behind  and now Race to the Top legislation to improve test scores in core subjects like math and reading.

"The future of our nation and our ability to compete in the economic marketplace with other countries is considered to hinge on these high stakes tests, with teachers, schools and entire school districts held accountable for failure.  The results, afforded much media coverage, have been mixed though the process has produced many students turned off to formal education.   An equally important consequence is that the increased narrowing of the curriculum to try to achieve these limited objectives, has undermined the ability of students to become active, informed and engaged citizens in a democratic society – capable of doing something about the issues which dramatically impact their lives.

"Lessons From the Real World, contends, like many educators, that focusing on test scores to improve student achievement is looking in the wrong place.

"Learning to read, do math and other subjects will come if students care about what they are learning, rather than drilling them with subject matter largely divorced from their real lives, and the community and societal problems which often impact those lives.

"In Portland, Oregon, teachers at a wide range of schools are putting this idea into practice.  While this is their story, it can help point the way to rethinking how schools  everywhere can be successfully transformed.

"Lessons From the Real World, a highly informative and entertaining documentary, filled with engaging teachers, students and lessons will surely bring much needed attention to a long neglected and critical aspect of the debate around public education.

"Since its release in April 2011, Lesson From The Real World has aired on many PBS stations across the country. It was also screened at the SOS (Save Our Schools) Conference in Washington D.C. in July 2011 and at the AERO Conference in Portland, Oregon in August."
Posted by Steve Hargadon at Monday, September 19, 2011