Join me Tuesday, July 26th, for a live and interactive FutureofEducation.com webinar with Kieran Egan, director of the Imaginative Education Research Group.  Dr. Egan's work focuses on a new educational theory and its implications for a changed curriculum, teaching practices, and the institution of the school.  He is the author of over 20 books, including the newly-published Learning in Depth


“Learning in Depth” is a simple though radical innovation in curriculum and instruction designed to ensure that all students become experts about something during their school years. Each child is given a particular topic to learn about through her or his whole school career, in addition to the usual curriculum, and builds a personal portfolio on the topic. To the surprise of many, children usually take to the program with great enthusiasm, and within a few months LiD begins to transform their experience as learners. The program usually takes about an hour a week, with the students working outside school time increasingly.

Date: Tuesday, July 26th, 2010
Time: 5pm Pacific / 8pm Eastern / 12am (next day) GMT (international times here)
Duration: 1 hour
Location: In Blackboard Collaborate (formerly Elluminate). Log in at http://futureofed.info. The Blackboard Collaborate room will be open up to 30 minutes before the event if you want to come in early. To make sure that your computer is configured for Blackboard Collaborate, please visit the support and configuration page. Recordings of the session will be posted within a day of the event at the event page.
Event and Recording Page:  http://www.learncentral.org/event/165066 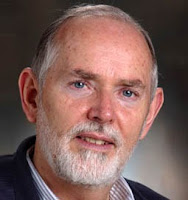 Kieran Egan was born in Clonmel, Ireland in 1942. He was brought up and educated in England. He read History (Hons.) at the University of London, graduating with a B.A. in 1966. He worked for a year as a Research fellow at the Institute for Comparative Studies in Kingston-upon-Thames and then moved to the USA to begin a Ph.D. in Philosophy of Education at Stanford University. He worked concurrently as a consultant to the I.B.M. Corp. on adaptation of a programming method, called Structural Communication, to new computing systems. He completed his Ph.D. at Cornell University in 1972. His first job was at Simon Fraser University in British Columbia, where he has remained ever since. He is the author of over 20 books, and co-author, editor, or co-editor of a few more. In 1991 he received the Grawemeyer Award in Education. In 1993 he was elected to the Royal Society of Canada, in 2000 he was elected as Foreign Associate member to U.S. National Academy of Education, he received a Canada Research Chair in 2001, won the Whitworth Award in 2007. His main area of interest is education. His work focuses on a new educational theory, which he has developed during the past two decades, and its implications for a changed curriculum, teaching practices, and the institution of the school. His work deals both with innovative educational theory and detailed practical methods whereby implications of his theory can be applied at the classroom level. Various of his books have been translated into about 10 European and Asian languages. His recent books include Teaching as Story Telling and Imagination in Teaching and Learning

(Chicago: University of Chicago Press, 1997), Getting it Wrong from the Beginning: Our progressivist inheritance from Herbert Spencer, John Dewey, and Jean Piaget

(Thousand Oaks, CA: Corwin Press, 2006), and The Future of Education: Reimagining our schools from the ground up